Passing a semi-truck is harder than it seems. If you change lanes too close to the truck or use poor passing technique, you could inadvertently put yourself in danger. Most drivers don’t realize that semi-trucks have poor visibility, and if the truck driver can’t see you as you’re passing, there’s a much greater risk of causing a crash.

But how exactly do you pass a semi-truck safely? Let’s take a closer look at both the truck’s limitations and the driver’s techniques.

The first thing you should know about semi-trucks is that they have massive blindspots. Because trucks are long and wide, their mirrors are much less effective than standard-sized vehicles. This creates a phenomenon called “the no-zone,” an area of zero visibility around the semi-truck. To get a better understanding of what this means, take a look at the graphic below. 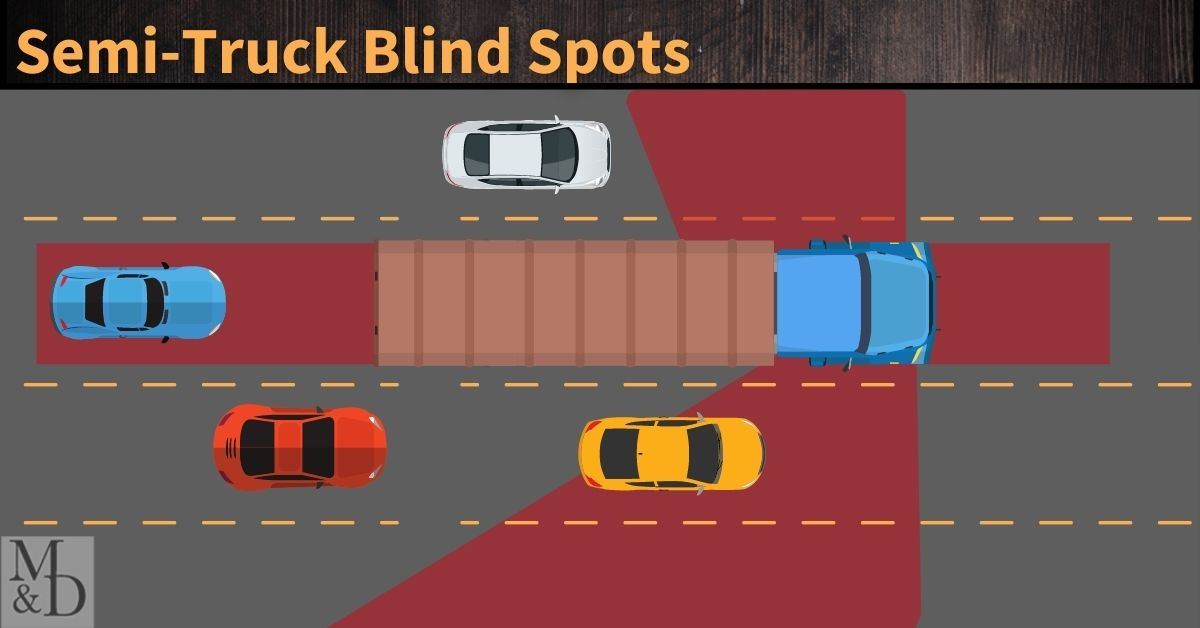 From this, we can see that trucks drivers cannot see anything about 20ft directly in front of their cab or 30ft directly behind their trailer. Likewise, they can’t see cars that are directly next to their cab on the driver’s side. But most shocking of all is that semi-trucks have extremely limited visibility on the passenger side, such that they cannot see anything in the two lanes to their right-hand side.

If a driver isn’t aware of these limitations and attempts to pass a semi-truck with poor technique, they could inadvertently endanger themselves and everyone else on the road.

But what does the no-zone have to do with passing? To find out, let’s examine how it affects each of the three elements of a highway overtake.

As you prepare to pass a semi-truck, make sure you are at least three car lengths away from the back of the trailer. Remember that truck drivers cannot see anything directly behind their trailers. If you are too close to their rear and change lanes, you could move from one part of the no-zone to the other, and the truck driver might have no idea you’re there.

Generally, the farther away you are when you change lanes, the better the odds the truck driver will see you before you enter their no-zone. That, in turn, helps them keep track of where the cars around them are so they don’t change lanes and sideswipe vehicles beside them.

Once you’re in the passing lane you should avoid lingering next to the truck. The longer you’re in their no-zone, the more likely the truck driver is to lose track of your vehicle.

Additionally, take care to never pass a truck on the passenger’s side. Remember, the no-zone is much bigger on that side and encompasses multiple lanes. The truck driver won’t be able to see you at all.

Merging too soon is one of the biggest mistakes people make when passing a truck. Before you merge back into the travel lane, make sure you can see the entire truck in the rearview mirror. This will help you be seen and prevent a crash.

Remember that truck drivers cannot see the first 20ft in front of their vehicle. A great number of crashes happen when drivers merge too close to a truck and then slow down. The truck driver cannot see the other driver or their brake lights because they are in the no-zone.

These crashes are often preventable, but it takes a firm understanding of the no-zone and conscious consideration of whether the truck driver can see you at any given time. Next time you see a truck on the highway, try to determine when you’re in the no-zone as you approach, pass, and finally merge back into the travel lane. It takes a little practice but learning how the no-zone works is a skill that could save your life.

When someone is injured or killed in a truck crash, they and their families have a right to pursue justice. If you or someone you love have been injured and need help moving forward, our team is here to help. To discuss your case with an experienced Shreveport truck accident attorney from Morris & Dewett Injury Lawyers, don’t hesitate to send us an email or call (888) 492-5532 today.